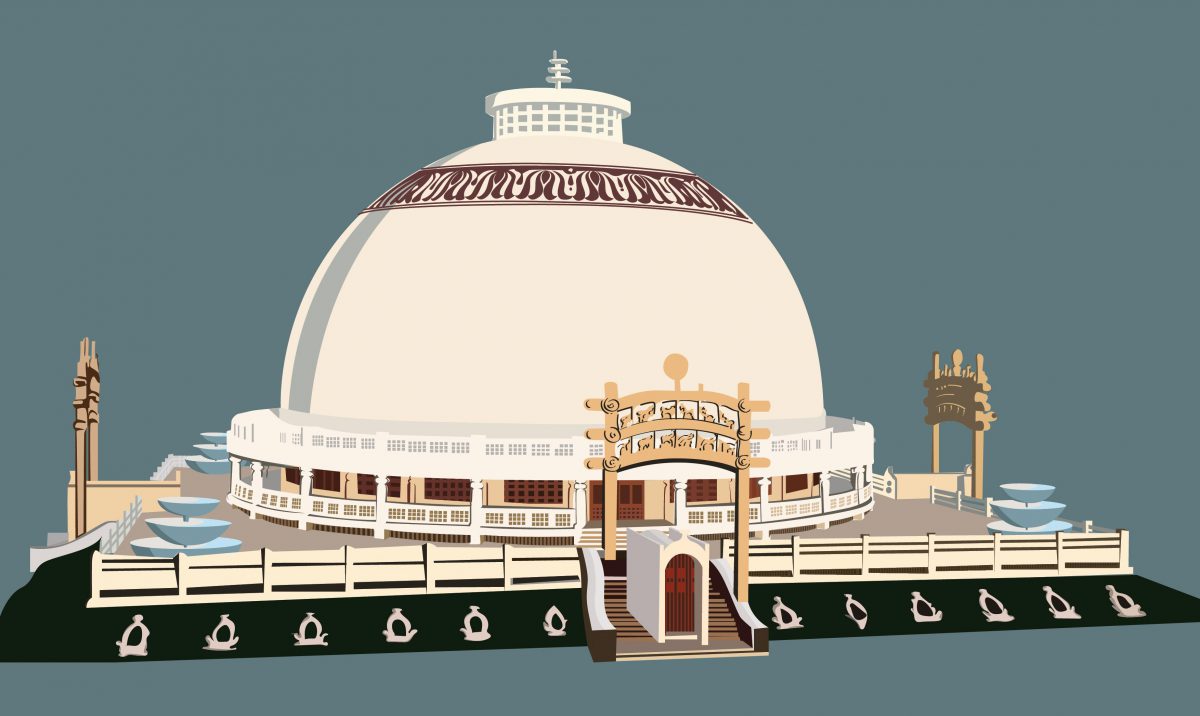 The geographical land spreads over 22 acres, covered with lush green beautification. The central part is dedicated for the giant stupa. Sheo Dan Mal, a famous architecture in Nagpur was handed over the responsibility to design a befitting structure of the stupa. He studied the Buddhist architecture around the world  for more than two years and came up with a glorified design that reflects the teachings of the Buddha.

The construction began in July 1978 and for the first time in Asia Central Block Locking System in constructing a hollow globe-like structure (the uppermost half part of the stupa) was used. It has a diameter of 120 sq.ft. More than 5000 people can be accommodated at once at this floor of 211 x 211 sq.mtrs. Sheo Dan Mal was the pioneer for this kind of innovation in structuring. The stupa is supported by four expanding arrangement of 16 columns at the first, 16 columns at the second, 24 at the third and the last layer of 24 columns again. The ground floor has a space of more than 20000 sq.ft. and is meant for offering prayer.

At the central part, another glass structure is founded on a marble square. There is kept a silver vessel polished with gold (Asthikalash) where the mortal remains of Dr. Babasaheb Ambedkar are preserved. The vessel originally was with the People’s Education Society, Mumbai and later handed over to the Samiti on 07th October 1981. In a splendor-some religious ceremony the mortal remains were instituted on 02nd October 2001. Besides that there are two statues of Lord Buddha donated to Samiti (on 25th February 1996) by Bhante Sawang and students from Thailand. The inaugural programme was held on 02nd October 2001 in the august presence of Bhante Arya Nagarjun Surai Sasai.

The stupa has four gates (part of stupa), similar in structuring again and they are mounted with images of Dhammachakra, horses, elephants, lions carved in Rajasthani marble followed after the stupa at Sanchi. It is a unique combination of the ancient and modern architectural features. It stretches a path opening towards the civic roads in four different directions. The space in between is decorated with green plantation and palm trees.

At the main entrance for tourists there is a book stall and security check-post.

At the eastern side, there is a Bodhi Tree, Bhikkhu Niwasa, a column in marble of 22 vows, Preamble of the Constitution of India.

The western side of the stupa is an open ground kept reserved for public programmes on the day of Dhammachakra Pravattan Din. A minor part is given for Dr. Ambedkar Sports Academy, Dr. Ambedkar Law College and Dr. Ambedkar Institute of Management Studies and Research and public amenities.

The north of deekshabhoomi has Dr. Ambedkar College run by the Samiti. It is a multi-faculty educational institution offering Arts, Commerce and Science streams.

The southern entrance is decorated with high stretching palm trees.